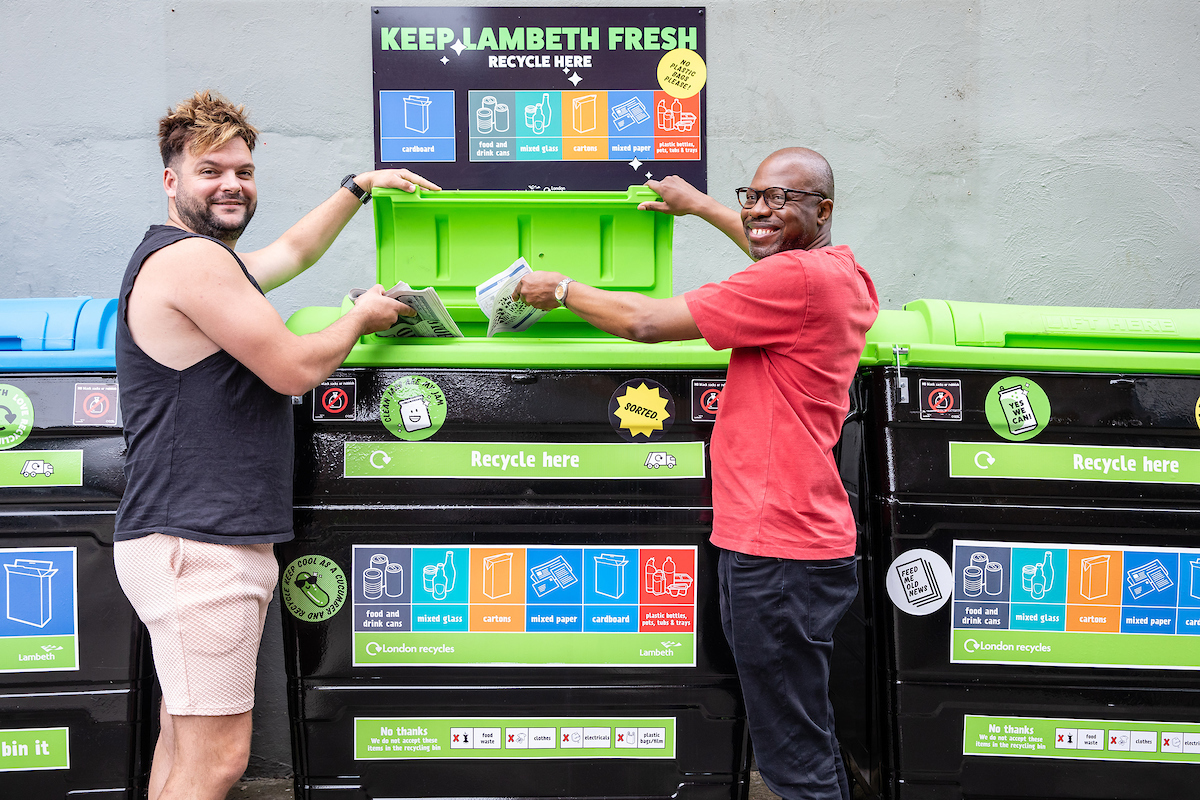 New recycling interventions and facilities are being brought in across four south London housing estates, based on comprehensive research on how to boost recycling in purpose-built flats.

The project, a partnership between ReLondon, Ecosurety, Lambeth Council and Peabody, hopes to significantly increase the capture and quality of dry recycling in four Lambeth estates, with results and learnings set to be shared more widely across the UK.

Residents in flats generally recycle less and receive lower levels of service compared to street-level properties. 20% of UK households currently live in flats, rising to up to 80% in some London boroughs, so increasing recycling in flats is vital to ensuring that recycling targets are hit. Finding proven and easily scalable ways to increase recycling in flats is particularly pressing in London and other urban areas.

Following extensive research with residents in flats spanning two years, the new interventions in Lambeth are based on common-sense approaches which have been shown to improve recycling rates in flats by a quarter.

With a focus on food waste, dry recycling, small electricals and clothing and shoes, one of the main principles is to co-locate all main bins at the Lambeth flats, making recycling easier and more convenient for residents. Other specific changes include the following:

The estates will all receive a new food waste service which will test two new interventions for the first time:  pedal-operated housing units to help combat the ‘yuck’ factor associated with food waste and address resident’s potential concerns around Covid-19, and smaller food waste bins that can be hooked to the inside of kitchen cabinets .

Each estate will have a donation bank for small electrical appliances in a central location, where residents will be able to recycle items such as toasters and irons. To raise awareness and encourage action, there will be a communal ‘clear-out day’ followed by two further pop-up collections to support residents.

Each estate will also have a dedicated clear-out day for clothing and shoes, followed by two further pop-up collections.

We know that recycling is most effective when residents are motivated, have the right information, and find it easy to recycle – so we’ve ensured that these new interventions are based on these critical factors. If we’re going to meet recycling targets as part of tackling the climate emergency, we urgently need to increase recycling in purpose-built flats – and we’re confident this initiative will help to do just that.

Purpose-built flats make up 37% of London’s residential accommodation, and nearly all new-build properties in the city are purpose-built flats. By 2030, nearly half of London households are expected to live in flats like these, and yet previous ReLondon analysis showed that recycling rates on 12 pilot estates in London were less than a third of the overall recycling rate in the capital.

For London to be a zero-waste city and tackle the climate emergency, it’s crucial that recycling is made easier for people living in flats. The Mayor supports boroughs directly and through Relondon to deliver their Reduction and Recycling Plans and achieve their waste targets. The flats recycling project is a key part of this, having improved recycling rates where they have been historically very low. The expansion of this excellent work supports residents of Lambeth to recycle even more materials easily and I look forward to seeing even more estates and boroughs come on board.

The Lambeth project will be evaluated by doing a comprehensive analysis of all waste across each estate before, during and after the project. The results will then be shared more widely with local authorities and housing providers to help scale up simple but effective recycling interventions.

We need swift action to make it easier for people in flats to recycle, and to ensure that every London resident has access to appropriate recycling services, wherever they live. We hope these simple steps introduced in Lambeth will have a significant positive impact – and that we can share the results more widely to help address a UK-wide issue. We want to enable many more local authorities to boost the quality and quantity of materials they collect from purpose-built flats.

The project has been made possible with funding from the Ecosurety Exploration Fund, a £1m fund set up by compliance scheme Ecosurety Limited to support projects that can reduce the environmental impact of packaging, batteries and e-waste through innovation or research.

We are thrilled to support this project, enabling ReLondon to address one of the last great challenges for local authority recycling – improving recycling for residents who do not have access to traditional street-level kerbside services. This project is set to uncover much needed insights that will be widely shared in 2022 to improve recycling for the 20% of households in the UK who live in flats.

ReLondon is a partnership of the Mayor of London and the London boroughs to improve waste and resource management and transform the city into a leading low carbon circular economy. Their mission is to make London a global leader in sustainable ways to live, work and prosper, by revolutionising our relationship with stuff and helping London waste less and reuse, repair, share and recycle more.

ReLondon’s team delivers tailored support to government, businesses and citizens and was established as a statutory Board under the Greater London Authority Act 2007 as the London Waste and Recycling Board (LWARB).

Ecosurety is the market leading producer responsibility compliance scheme investing in quality recycling. It works on behalf of its customers to source quality evidence and ensures they comply with the UK’s packaging, e-waste and batteries regulations.

As the only B Corp certified compliance scheme in the UK, Ecosurety is committed to the balancing of profit with social and environmental performance. Ecosurety seeks to deliver change for good for its staff and its community, as well as helping businesses minimise their impact on the environment and drive a tangible increase in UK recycling capacity.

In 2019 Ecosurety launched its Exploration Fund – providing £1million of funding over three years for projects that offer tangible solutions to the negative effects that packaging, batteries and electronic waste have on the environment. It is the first ever such fund to be launched by a UK based recycling compliance scheme.

Peabody has been creating opportunities for Londoners since 1862, when it was established by the American banker and philanthropist, George Peabody.

In July 2017, Peabody and Family Mosaic merged to create a new Peabody, more than doubling its capacity to provide new homes in London and the South-East. The new organisation owns and manages more than 55,000 homes, providing affordable housing for around 111,000 people.

As well as bricks and mortar, Peabody provides a wide range of community programmes in their neighbourhoods, including help with employment and training, health and wellbeing projects, family support programmes and a dedicated care and support scheme.