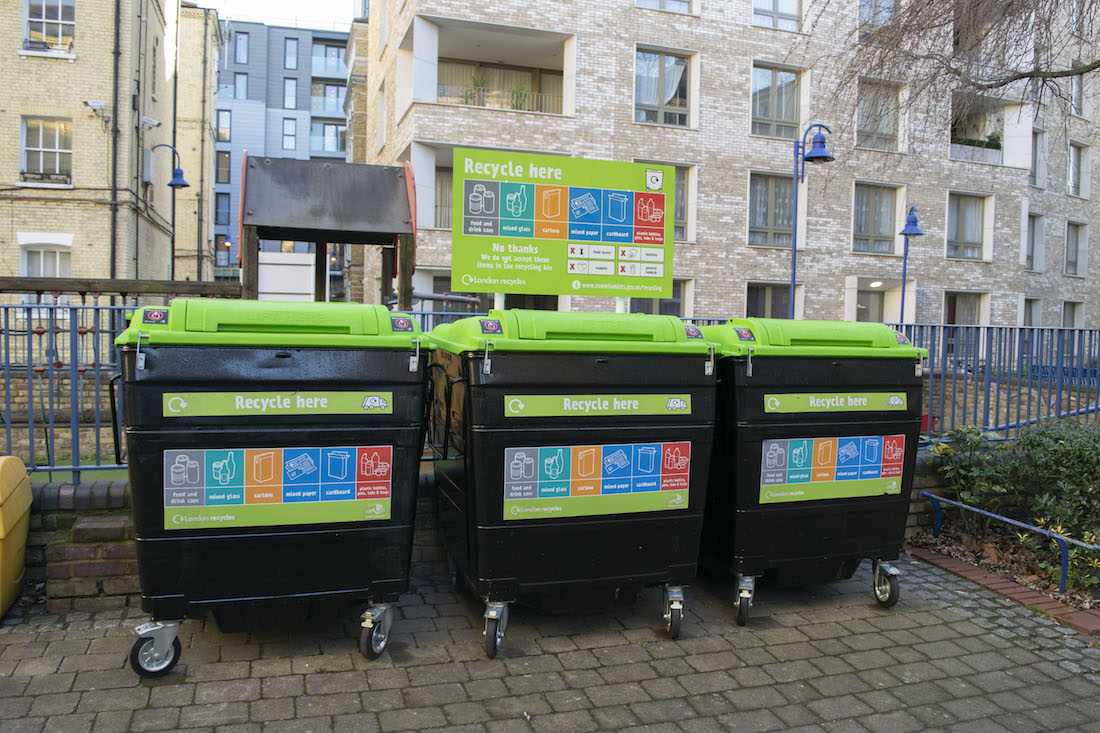 London only recycles about 33% of its household waste, and recycling in flats is significantly lower than houses. Across the capital the number of people living in flats is increasing, and nearly all new build properties are purpose-built flats. We knew we needed to act to find new and better ways to support residents in flats to waste less and recycle more.

We carried out detailed inventories of 132 inner London Peabody estates and in-depth ethnographic research with residents to understand people’s attitudes, practices and barriers around recycling so that we could improve recycling and capture rates.

Using these learnings, we worked with housing providers, local authorities and waste management providers across London, to design the ‘Flats Recycling Package’ – a set of changes to improve recycling arrangements in purpose-built flats that we could implement and test. The ‘Package’ provided residents with clear and reliable information about recycling and waste services, and brought the look and feel of the bin areas up to a common standard.

We introduced the ‘Package’ across 12 London estates over a nine-month period, along with behavioural interventions to encourage residents to recycle more.

These measures substantially increased the volume and quality of recycling across all estates.

These measures substantially increased the volume and quality of recycling across all estates. Following the trial’s success, we created practical guidance on implementation, and are working with local authorities and housing associations to further introduce the ‘Package’ to help London achieve its ambitious recycling targets.

What was the challenge?

Improving recycling services for people in flats is vital in achieving London’s recycling targets and helping to protect our planet.

London only recycles about 33% of its household waste. With recycling in flats significantly lower than in houses, this presents a particularly challenging situation across the capital, where the number of people living in flats is rising and where nearly all new build properties are purpose-built flats. Estimates suggest 46% of the capital’s households will be living in purpose-built flats by 2030.

46% of the capital’s households will be living in purpose-built flats by 2030.

With the UK government and the Mayor of London setting ambitious and aspirational recycling and waste targets to help combat the crisis, we knew we needed to find new and better ways to support residents to recycle in flats.

What did we do?

Without much evidence about why recycling rates are low in flats or how to improve them, we decided in 2018 to carry out the most comprehensive research ever undertaken on how to achieve improvements in urban recycling rates in flats.

Inventories showed a lack of consistency in the quality of waste and recycling services provided. Services tended to be based around operational compatibility, which did not necessarily make them easy for residents to use.

The ethnographic research revealed a complex picture, with many reasons why people living in flats might not recycle. What was clear was that effective recycling is only achieved when three interdependent conditions were met – residents want to recycle (motivation), know how to recycle (knowledge) and find it easy to do so (ease).

Using these learnings, and in consultation with housing providers, local authorities and waste management providers across London, as well as behaviour change experts, we designed the ‘Flats Recycling Package’ – a set of changes to recycling arrangements in purpose-built flats that we could implement and test to see how effective they were at improving recycling and capture rates.

The ‘Package’ was designed to provide residents with clear and reliable information about recycling and waste services, and to bring the look and feel of the bin areas up to a common standard.

It was introduced with Peabody across 12 London estates over a nine-month trial period. The estates selected were chosen because their recycling rates were below 30% (2016/17), and more than half the housing is flats.

Five behavioural interventions were also introduced across 10 of the 12 estates to make it easier and more motivating for residents to recycle and providing them with the knowledge and information to do so. This ranged from introducing new signage around rubbish bins, feedback posters and in-home storage solutions for recycling.

What were the outcomes?

The ‘Flats Recycling Package’ of measures substantially increased the volume and quality of recycling across all 12 estates. Although starting from a very low base, with lots of room for improvement, the overall capture rate increased by 22%, the recycling rate increased by 26% and the contamination rate decreased by 24% over the nine-month period. Evidence was inconclusive on the effectiveness of the behavioural interventions on influencing recycling rates, but feedback suggests that they may have had an impact on behaviour.

Following the success of the trial, we have worked with local authorities and housing associations across the capital to introduce the ‘Package’ and help London achieve its recycling targets.

We also developed a toolkit for housing and service providers and building managers giving practical advice on implementing the ‘Package’, and an online tool to help London boroughs to understand the benefits and costs of implementing it.

To evaluate how effective the interventions were, we used a unique case study-based analysis approach (Qualitative Comparative Analysis (QCA), which comprehensively looked at the ‘before-and-after’ measurement of waste and recycling volume and composition in flats, including detailed feedback from residents and stakeholders. This was a first for waste research and evaluation.

ReLondon was awarded £146,000 of funding from Ecosurety’s Exploration Fund to build on the previous award-winning research to maximise recycling in purpose-built flats, by introducing additional recycable materials (food, textiles and electricals).

This collection of case studies provides further information on the 12 inner London estates that were part of the Making recycling work for people in flats research project.

The case studies detail the interventions introduced on each estate, and the results.

About the Making recycling work for people in flats research project

This two-year research project was delivered by ReLondon in partnership with housing association Peabody and six inner London boroughs.

The aim was to better understand the barriers to recycling for people who live in purpose-built flats and identify practical measures that could be taken by housing providers, building managers and service providers to remove those barriers. The desired outcome was to improve the quantity and quality of recycling collected from purpose-built flats across the capital.

Want to find more resources relating to this research project?