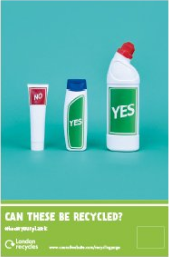 Londoners lead the way on improved recycling: 62% recycle more than a year ago

London Recycles is calling on all Londoners to take action this Recycle Week and help protect our environment. New data released by WRAP shows 62% of Londoners now recycle more than they did a year ago – but we could all still be doing more.

Nearly a third of Londoners surveyed cite environmental concerns – including increased awareness of climate change – as the main reason for increasing the amount they recycle.

To harness the groundswell of support for climate action – highlighted by the thousands of people who took part in Friday’s climate strike – London Recycles is reminding everyone of the impact that recycling can have: for example, recycling one bleach bottle saves enough energy to power a streetlight for 6.5 hours.

While WRAP’S research showed an increase in recycling, it also revealed that London households sometimes incorrectly put items like nappies, toys and toothpaste tubes in the recycling bin.

To help Londoners recycle more effectively, London Recycles has provided the following tips in partnership with Recycle Now for this year’s Recycle Week:

With more and more Londoners wanting to take positive action to help the environment, one simple but significant step we can all take is to make sure we get our recycling right. We’re encouraging everyone in the capital to take action and recycle more this Recycle Week. Recycling really matters. Recycling an item rather than throwing it in the rubbish bin means that it will be dealt with in the most environmentally friendly way, keeping materials in use. If each of us re-used or recycled just one more thing each day, it would make a huge difference.

From eye-catching stunts to targeted local activity, Recycle Week will see activities take place across the capital, including:

About the data
Data showing 62% of London households are now recycling more than a year ago is sourced from WRAP’s Recycling Tracker 2019, based on 976 London adults (aged 18+) surveyed